Fighting has raged between Ethiopian government forces and a rival political faction in the country’s northern Tigray region since November 2020, threatening to destabilize the region and cause a humanitarian disaster. How should the United States respond?

Students will learn that conflict within a single country can have outsized effects on the surrounding region and global security.

Students will learn that Ethiopia holds strategic importance both for stability in the Horn of Africa region and for U.S. counterterrorism interests.

In November 2020, conflict erupted in Ethiopia’s northern Tigray Region after tensions boiled over between the federal government and the Tigray People’s Liberation Front (TPLF). The TPLF had dominated Ethiopian politics for decades, despite Tigrayans constituting only 6 percent of Ethiopians. The TPLF’s control over government ended in 2018, when Abiy Ahmed became Ethiopia’s prime minister. Abiy pursued policies to bolster the federal government’s power and address dissatisfaction at the TPLF-led government’s marginalization of Ethiopia’s other ethnic groups. The TPLF, however, felt threatened by these measures and opposed Abiy’s government. Tensions escalated through fall 2020 and erupted into open conflict on November 4, after Abiy accused the TPLF of ordering an attack on federal forces in Tigray. Subsequently, the Ethiopian government blocked phone and internet services in Tigray and deployed troops to the region. Ethiopian forces, joined by troops from neighboring Eritrea, quickly occupied Tigray’s capital and declared victory. However, fighting has continued in Tigray’s rural areas, and federal troops have yet to withdraw. So far, more than five hundred thousand people have been displaced and at least five hundred have been killed, although some estimates are considerably higher. Credible reports have emerged of Ethiopian and Eritrean forces committing mass atrocities, including ethnicity-based attacks, sexual violence, and attacks on civilians. Meanwhile, restrictions on access and communication continue to impede the flow of humanitarian aid and efforts to assess the true damage of the conflict.

The stakes of this conflict are considerable. Ethiopia has long promoted regional stability, providing diplomatic support to Sudan in its efforts toward a democratic transition, deploying its sizeable military in support of international peacekeeping operations, and assisting efforts to stabilize crises in neighboring South Sudan and Somalia. Ethiopia has also been an important partner in U.S. counterterrorism efforts in Somalia. The United States welcomed Abiy’s reforms as a victory for democratic governance and an opportunity to deepen ties with Ethiopia. The current conflict, however, has undermined confidence in Ethiopia’s democratic progress and risks limiting future cooperation. If it worsens, it could further jeopardize security and stability in the region, set back U.S. counterterrorism aims, and drive a humanitarian catastrophe that threatens millions. Consequently, U.S. policymakers have clear humanitarian and strategic interests in seeing an end to the conflict in Tigray, the provision of humanitarian assistance to the region, and a political dialogue that could ensure durable peace. However, a mishandled response could also harm U.S. interests. Policymakers need to weigh the desire to address the immediate situation in Tigray against their interest in maintaining a cooperative relationship with Ethiopia. Direct U.S. involvement could improve conditions in Tigray, but a heavy-handed response could also alienate a strategic ally, making future cooperative efforts to promote peace and stability and combat terrorism in the region more challenging.

The crisis in Tigray is far from resolved. Continued fighting in the region threatens to become an extended, destabilizing conflict and a humanitarian disaster. U.S. policymakers have condemned the violence and called on Ethiopia to lift restrictions on access and communication and work toward a peaceful resolution of the conflict. International pressure has spurred some improvements in humanitarian access to Tigray, but the crisis remains. Meanwhile, a recent U.S. government report has found allegations of ethnic cleansing by Ethiopian forces and allied militias to be credible. Considering the new report, the president has convened members of the National Security Council (NSC) to deliberate whether more direct U.S. involvement in Tigray is warranted and, if so, what that should entail. NSC members will need to consider growing humanitarian concerns alongside the risks of increasing instability to U.S. interests in the Horn of Africa, and the strategic importance of continued cooperation with Ethiopia. 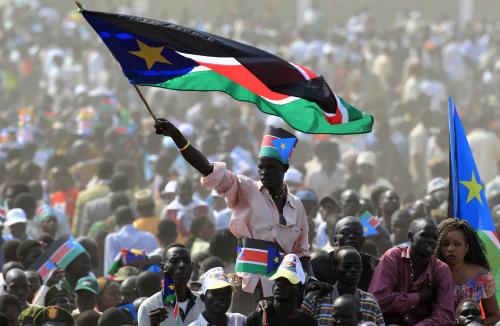