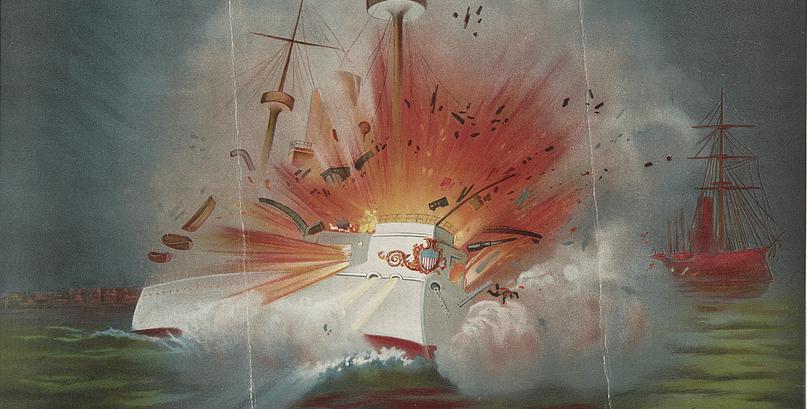 Explosion of the USS Maine in 1898

After the mysterious explosion of the USS Maine in Havana, Cuba, the United States has decided to go to war with Spain. President William McKinley and his advisors now need to decide how to intervene against Spanish colonial rule in Cuba and what U.S. war aims should be.

Students will understand that war strategy stems in part from war aims.

Students will understand that intervention inevitably shapes future relations with a country.

By the 1870s, tensions between the United States and Spain were growing. Once a vast empire, Spain had lost much of its overseas territory over the nineteenth century, leaving Cuba as one of its last remaining footholds in the Western Hemisphere. But Madrid's grasp had begun to slip there as well. Starting in 1868, Cubans waged three successive liberation wars, culminating in the 1895 Cuban War of Independence. Spanish forces acted harshly to suppress the Cuban rebellion, including by forcibly relocating hundreds of thousands of Cuban civilians to concentration camps and practicing scorched-earth tactics to starve the rebels of supplies. More than two hundred thousand Cuban civilians died as a result of this reconcentration policy. U.S. journalists brought the story of Cuban liberation to American readers, stoking widespread sympathy for the Cuban cause and outrage toward the Spanish empire. As the war dragged on, public outrage began to spur calls for U.S intervention on behalf of the Cubans.

Although public interest in Cuba was mainly humanitarian, the United States had economic interests in the island as well. In the wake of a massive depression in 1873, the United States sought economic opportunities to aid recovery. Spain’s waning power in Cuba gave U.S. businesses a chance to invest there, particularly in the island’s sugar and tobacco industries. Consequently, the U.S. and Cuban economies grew increasingly interconnected. By the 1890s, U.S. investments in Cuba amounted to roughly $50 million, and nearly 95 percent of Cuban sugar exports went to the United States. Some Americans feared that continued Cuban imports would hurt certain domestic producers. However, most U.S. policymakers were more concerned that instability in Cuba would endanger U.S. investments and harm the overall U.S. economy. Intervention, therefore, offered an opportunity to protect U.S. economic interests and strengthen ties with a newly independent Cuba by aiding in the defeat of Spanish forces.

Policymakers also had strategic interests in Cuba, particularly as the United States looked to expand its influence in the Western Hemisphere. Cuba presented a strategically valuable location for a naval outpost. An expanded U.S. naval presence in the Caribbean could protect regional trade and aid U.S. efforts to develop a canal through Nicaragua or Panama to connect trade routes in the Atlantic and Pacific oceans. Spanish domination over Cuba, though, curtailed the United States’ ability to advance its political and strategic ties with Cuba. Some policymakers hoped that the removal of Spanish control in Cuba could enable a long-term U.S. presence in the region. Others, however, worried that intervention in Cuba was not worthwhile. In addition to the immense cost of a war, the United States had no way to ensure that intervention would lead to an independent Cuba friendly to U.S. interests. Policymakers, therefore, needed to consider how to prioritize various U.S. interests to determine how Washington’s relationship with a newly independent Havana would look.

The USS Maine—an American battleship sent to protect U.S. interests in Cuba—has exploded in Havana Harbor, killing 260 American sailors. Although the source of the explosion is unknown, the blast has sparked a media frenzy as U.S. observers accuse Spain of orchestrating the incident and demand retribution. Diplomatic efforts with Spain following the explosion have failed, and public fury is growing, leading the William McKinley administration to conclude that intervention in Cuba is now inevitable. Congress has approved the intervention, with an amendment forbidding any U.S. attempt to annex Cuba. With the United States on the path to war, President McKinley has convened his cabinet to determine what the United States’ aims should be and how best to pursue them. Policymakers will need to consider and prioritize the varying U.S. interests in Cuba and weigh the costs and benefits of pursuing those interests. 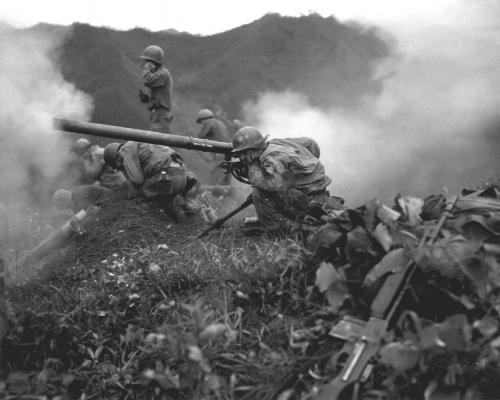