With thousands of American settlers migrating west to the contested Oregon Country and a campaign promise from President James K. Polk to annex the entire territory, how should the United States respond to British naval buildup in the region and a deteriorating U.S.-British relationship?

Students will understand that, in negotiations, presidents often have to manage foreign policy risks while satisfying public opinion.

In the early nineteenth century, the United States and several European powers competed to wrest control over the Pacific coast of North America from the American Indians already present in the area. By the 1820s, Russia occupied the northern portion of the coast, while Spain (and later Mexico) claimed the southern portion. The struggle for the remaining territory between the latitudes of 42° and 54°40′ North, which the United States called the Oregon Country, fell between the United States and the British Empire. Both sought this territory to advance commercial interests such as the fur trade and because it was the only remaining area on the west coast where either country could build Pacific Ocean ports to access burgeoning trade routes. Despite long negotiations, the United States and the British Empire could not agree on how to divide the territory. Neither was willing to relinquish the area between the Columbia River and the forty-ninth parallel, which contains Puget Sound—the region’s best natural harbor. In 1818, the two countries settled for a stalemate, establishing a treaty of joint occupation over the Oregon Country. But by the 1840s this agreement grew strained. Although both countries initially used the territory mainly for trapping and trade, thousands of U.S. migrants had begun to settle permanently in Oregon, driven by a depression in 1837 and the expansionist ideology of manifest destiny. Between 1840 and 1845, five thousand settlers journeyed west and began establishing a permanent presence in Oregon. With more settlers arriving each year, public pressure to cement U.S. control over the territory grew.

In 1844, amid fierce public debate about whether and where the United States should expand, Democrat James K. Polk was elected president. Polk’s campaign centered on manifest destiny and relied on supporters of Oregon annexation, to whom he promised to claim the entire territory. Polk reiterated his promise at his inauguration, claiming, “Our title to the country of the Oregon is ‘clear and unquestionable,’ and already are our people preparing to perfect that title by occupying it.” Democratic newspapers began pressing for immediate annexation and denounced those suggesting compromise as British sympathizers. Slogans such as “Fifty-Four Forty or Fight” emerged, promoting the hard line. The British saw Polk’s stance as a challenge to the empire’s honor and a threat to British economic interests and responded with their own threats. Officials declared the Royal Navy was prepared to commission a force in defense of Oregon that would overwhelm the U.S. Navy. As tensions mounted, both countries prepared for the possibility of war. In the summer of 1845 the Polk administration offered a compromise, renewing the initial U.S. proposal to divide Oregon along the forty-ninth parallel, placing Puget Sound under U.S. control. The British rejected this offer, however, and Polk ceased negotiations.

A British warship has been spotted near the Columbia River, and reports indicate several more British vessels have been deployed to the Oregon territory. Considering the recent failure of negotiations with Britain, this mobilization suggests the British Empire’s claims of readiness to protect its interests by force are more than empty words. As tensions rise, President Polk has called on Congress to terminate the joint occupation treaty in one year. Polk has convened his cabinet to determine what territorial claim to negotiate for, or perhaps fight for, in the coming year. Cabinet members will need to weigh the risk of war against preserving U.S. interests in the region and protecting U.S. citizens already in the area, while taking into account Polk’s promise to voters to claim the entire territory.

Use the following case to spark discussion and help students to think through what they would do if they were decision-makers. View the Pop-Up Case Guidelines for some inspiration for how to structure your conversation. 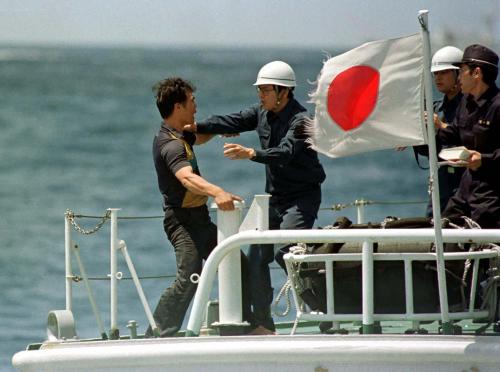