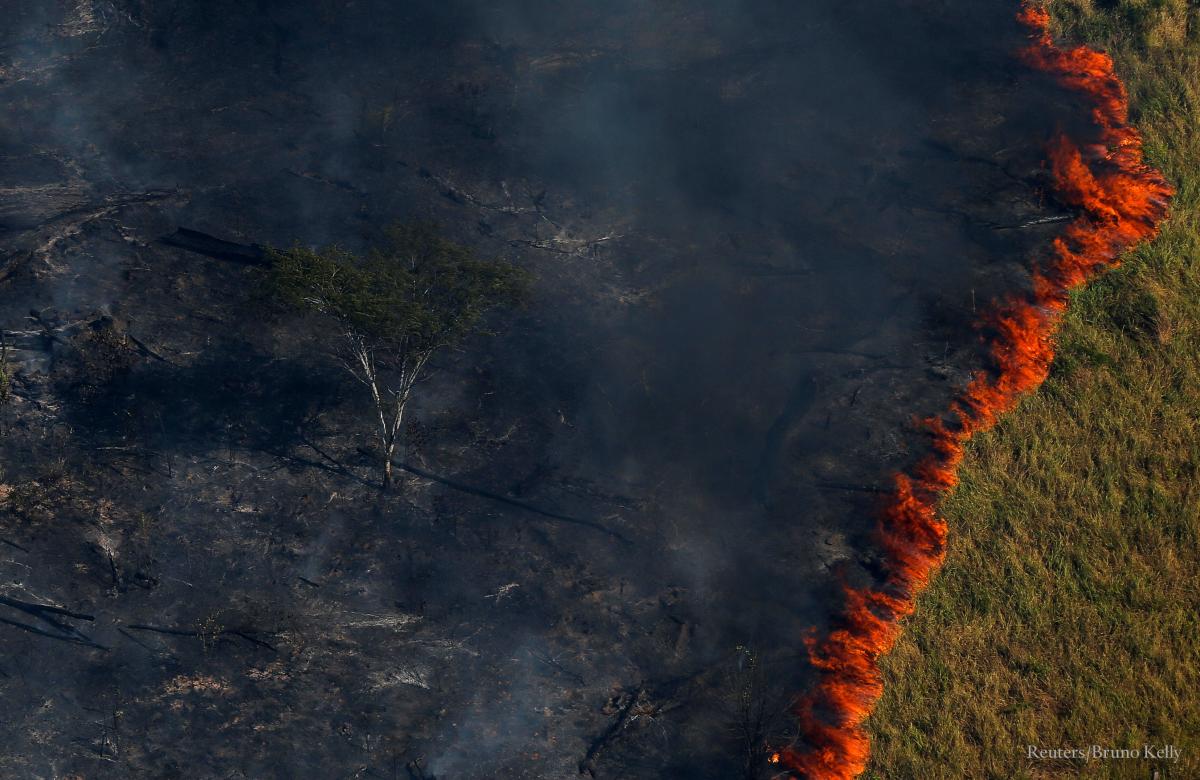 Students will understand that deforestation is occurring in the Amazon, which contributes significantly to climate change.

Students will understand that the United States can use economic statecraft in several ways to influence Brazil’s Amazon policy, but each comes with risks, as certain measures could be considered a violation of Brazil’s sovereignty.

The Amazon—the world’s largest rainforest—is disappearing. As much as 17 percent is already gone. Destruction of the rainforest has gone on for decades, but it is intensifying, increasing 47 percent under Brazilian President Jair Bolsonaro, who has fueled the practice by easing regulations and supporting the expansion of mining, agriculture, and commercial developments in the Amazon. This is driven in large part by a desire to spur growth in an economy that has struggled significantly in recent years. Deforestation in the Amazon is a triple threat to the environment, with global ramifications including sea level rise, crop failures, and extreme weather. First, it means fewer trees can capture carbon dioxide, a greenhouse gas, from the atmosphere. Second, many felled trees are burned, releasing previously captured carbon dioxide. Finally, the forest is often replaced with a high-emission industry such as livestock farming. The Amazon is approaching a tipping point: once 20 to 25 percent of the rainforest is lost, scientists predict the region will turn drier, transitioning into scrubland or savannah, further inhibiting its carbon-capturing ability. Because of deforestation’s global consequences, governments around the world, including the United States, have an interest in checking the practice.

However, such intervention carries risk and could appear to challenge an important international norm. Sovereignty is the idea that countries should have control over their own internal affairs—a principle that suggests Brazil can use its land as it wishes. Brazil has done just that, enabling deforestation to its economic benefit as it enlarges the agricultural industry, which accounts for over 20 percent of the country’s gross domestic product (GDP). However, the global consequences of Brazil’s land-use decisions have been so ruinous that some policymakers are suggesting intervention, even if such a move would undermine Brazil’s sovereignty and could set an uncomfortable precedent. The United States could in turn face sanctions of its own, for instance over coal mines or manufacturing practices.

The United States could use economic measures to intervene—either imposing sanctions or using aid to shape Brazilian policy in the Amazon. It could sanction Amazon-relevant industries such as timber exports and beef raised on deforested land. Still, Bolsonaro has made clear that Brazil would likely fiercely resist such measures. Sanctions would also set the strongest precedent for undermining a country’s sovereignty on behalf of the environment, opening the door to similar sanctions against the United States. The United States could also provide Brazil with economic incentives to stop deforestation and to farm using more sustainable methods. Economic incentives have succeeded in the past; an 80 percent decrease in deforestation between 2004 and 2012 coincided with significant aid from the internationally funded Amazon Fund. Aid carries less risk of harming diplomatic and economic relations and is more respectful of Brazilian sovereignty than sanctions, but Bolsonaro has still discouraged any attempt at outside influence. A final, low-risk option is for the United States to maintain its current policy of simply making statements condemning deforestation, perhaps while waiting for Brazil to elect a new president. However, with the Amazon nearing a tipping point, the window for curbing deforestation could be closing.

Brazil’s policies regarding the Amazon rainforest have increased deforestation at an alarming rate, which could permanently damage the region and contribute to climate change worldwide. At the same time, intervening to stop the deforestation is a dicey proposition because it undermines Brazil’s sovereignty. Such a move could set a damaging precedent and would certainly meet resistance from Brazil. However, the United States has an interest in combating climate change and has pronounced it a foreign policy priority. Therefore, the president has called a National Security Council (NSC) meeting to decide whether the United States should intervene in Brazil, and if so, which method would be best.